My name’s Rich and I live with obsessive compulsive disorder (OCD). Together with my dad we’re hoping that our story leaves you feeling like you’re not alone. And maybe you’ll learn something about OCD that you didn’t know before!

Mental health is universal, affecting people from all walks of life – regardless of age, race, religion, sexuality, gender, or geography. Over the last decade, we’ve come a long way when it comes to conversations about mental health, and I’m also now starting to see – thanks to the tireless work of charities and advocates – that mental illness is being talked about more in the public domain too.

However, I’m still incredibly passionate about getting parents, and in particular, fathers, talking about mental health and illness with their children. I know that my experience – like anyone who lives with a mental illness – is unique to me, so I am only speaking from my perspective.

I want to tell you about my dad, my hero. Common is the phrase, “I’d be dead without them” but, for me, it’s a matter of certainty that I wouldn’t be alive today writing this blog were it not for the unwavering support, sacrifice and love from my dad, Barry.

If you’re not familiar with the illness, OCD has been regarded by the World Health Organisation as one of the top 10 debilitating illnesses when it comes to loss of quality of life and earnings. It’s rooted in anxiety, and revolves around the person having obsessive, intrusive thoughts – about things like harm, sexuality and violence – and then carrying out compulsive behaviours to try and quell the intense fear and worry created by the thoughts – which could take the form of counting, repeating mantras, checking, tapping, or mentally reviewing previous events.

In brief, I’ve spent the last 15 years since my diagnosis locked in a constant struggle with my mind. At my lowest, and when the OCD was at its worst, I spent roughly nine months practically bed-bound, relying on my dad and others for support and care. I was 19, and he had to help me in every way possible, from washing, eating, dressing, and drinking water. I was a shadow of my former self, physically so unwell that I was almost unrecognisable, and every day I had suicidal thoughts. I felt so desperate and hopeless. It was one conversation with my dad that changed everything for the better, and I’ll never forget it.

A long chat with my dad

Recently I sat down with my dad on FaceTime and we had a long chat about those years – all the anguish and pain we experienced together. What I didn’t expect was for him to open up to me about how hard he found it all, and most poignantly, how alone he felt. Which is why, together, we wanted to write this blog. So that parents, fathers and children can read a lived-experience account of how mental health and mental illness can impact on the parent-child relationship. However, rest assured this isn’t just a story of sadness, but one of hope, love and perseverance.

Barry, when did you first talk to Rich about him living with OCD? Had you noticed changes in his behaviour?

Barry: I remember when Rich was little, he couldn’t go into the computer room at home and I didn’t know why. I also remember that in the living room he had loads of comics and papers that were all in a mess in front of the television. I kept asking him to tidy it and he kept saying “yeah yeah yeah”. So the next day I tidied it up when he was at school. When he got home he went absolutely berserk. I think that was one of the first things I picked up on.

Richard: There were lots of things I did when I was a kid and at the time, I didn’t know that it could be attributed to OCD. For example, I couldn’t accept having a book that had a folded edge or any ripped pages at all. And when anything had a sticky label on it, for example a new CD, if I couldn’t get it off I wouldn’t be able to focus and would become hysterical and wouldn’t be able to use it.

Barry: I can’t remember really talking to him about it until one time when he was around 18 and we were in Greenwich and Richard completely broke down in the middle of the street. I felt scared but finally he was telling me what the problem was. Because the not knowing was the real problem; being unaware of what he was thinking and feeling. I remember going back to the car, sitting in the back, and I’m sad to say I can’t remember lots about what we said. But it was a relief that finally Richard was opening up and telling me everything he was feeling and scared of. I felt really frightened and I remember thinking “What can we do now? What can I do?” But I do also remember telling him he wasn’t alone anymore.

Richard: One of the only things I remember about that day was dad’s reaction when I explained everything I’d been obsessing, worrying and thinking over for the last few years. I distinctly remember him looking at me and just saying, “Whatever happens next, you’re not alone anymore, you don’t have to go through this on your own.” It was such a relief and the epitome of the phrase ‘a weight being lifted off your shoulders’. I will never be able to express in words how thankful I am to my dad for how he responded in that moment. 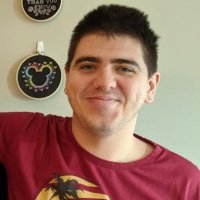 I distinctly remember him looking at me and just saying, “Whatever happens next, you’re not alone anymore, you don’t have to go through this on your own.”

What challenges did you face supporting Rich?

Barry: I had no knowledge of what OCD was, where I could find help or how to understand it. I kept in touch with Richard’s counsellor, Trevor, who helped me understand how I should deal with what he was going through, at the different stages. A big thing was that I couldn’t talk to my parents as they didn’t understand it simply because of their age, so I didn’t have anyone that I could talk to apart from Trevor.

At the time, there just wasn’t anything about OCD in the public domain that I could access or that could help me. It sounds like I’m talking about ancient times, but it was different 15 years ago. It wasn’t as easy to find articles and information about it on Google and I struggled to understand it myself which made it scary. And because I was scared, I used to give in to a lot of what the OCD demanded of Richard and myself. The fact that Richard didn’t live at home was even harder.

It’s difficult to think about now, but I know Richard should have been sectioned when he was most unwell.

I really struggled to manage looking after Richard, taking care of my parents and keeping on top of home management and my job, but I had a lot of support from three colleagues in particular at work – without whom I’m sure I wouldn’t have been able to cope. I asked for help from my employer, and I got put in touch with HR. I explained the problem I was having with Richard and that I had to physically help him with things, and the response I received was infuriating. She believed that as Rich was over 16 he was no longer my responsibility. It felt as if she didn’t want to try to understand or help our situation.

That’s why I think the work that mental health charities do with big companies is so good, because hopefully it will help people who might find themselves in a similar position to me get the support we need. I then took 4 months off work, on sick leave, to care for Richard and to be able to cope myself.

In more recent times, has it been easy to talk to friends and family?

Barry: It is much easier but if they don’t experience it, it’s still hard for them to understand. I think with any mental illness, if people have never been close to someone experiencing it, they can never understand it. There were times at work where my colleagues, although sympathetic, didn’t believe things were as bad as I was explaining. I recognise that this wasn’t their fault and simply down to lack of knowledge. They couldn’t comprehend the grip the illness had on Richard. It wasn’t until a documentary that Richard featured in was aired on telly that a close colleague said to me he was really sorry and that he didn’t have a clue what me and Richard were going through. I’ve since had more ex-work colleagues say similar things after watching the documentary.

Richard: For me, the fact that the general conversation about mental health is talked about in much greater detail and with far less stigma attached, has made it significantly easier to talk to family and friends. However, similarly to what my dad said, if you’ve not got experience of OCD, you’ll never truly understand what it’s like. That’s what makes it so different from anxiety and depression because many people will be able to empathise with feeling depressed and anxious at various times in their life without a diagnosis of the illness. But with OCD, there’s nothing similar that someone could experience without having the illness itself.

What have you learnt about OCD?

Barry: The person with OCD knows it is lying to them and thinks it is ridiculous. Because when I’ve spoken to Richard and other people with OCD (or who know about OCD) they all say, “I know it seems ridiculous but…” or “I know it makes no sense but…” In hindsight, I wish I had been more firm with Richard, but I don’t know if that would have worked or made a difference.

What is the one thing you’d want a parent supporting their child with a mental illness to know?

Barry: Help is out there, and don’t be afraid to push for that help. Compared to how it was when Richard and I were going through our worst periods, there is so much more help now on social media and the communities that support people living with OCD and their loved ones. Don’t be afraid to reach out and ask for help. Our story is evidence that there is hope, always.

Richard: To any fathers out there supporting children with mental health problems, mental illnesses, or OCD specifically, I have one thing to say: always tell your children they are loved, that you support them and that no matter what, you will be by their side. OCD is bloody hard to live with and it can be immensely challenging for people supporting a loved one who has it. But with the right support and advice from professionals, friends and loved ones, a shoulder to cry on and open lines of communication, OCD can become something that lives alongside you, not something that defines you.

How Exertis UK are breaking down the stigma surrounding mental health

Why Christmas isn’t easy for everyone and how to cope